Love of horses leads to dentistry venture for district 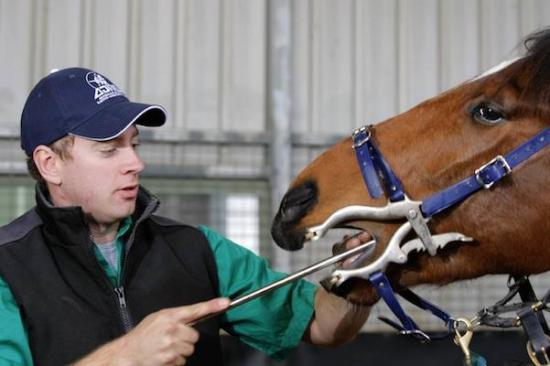 By Rachael Houlihan, The Standard

As The Standard's photographer stands in a stable snapping away, he grimaces at the scraping sound of a rasp on a racehorses teeth.

"It sounds just like my teeth do at the dentist," he remarks.

Of course, all horse owners are used to this familiar noise and for Warrnambool equine dentist Josh Julius it's all part of the job.

Mr Julius has recently established West Vic Equine Dentistry and he has seen his venture grow as he tends to horses across the south-west.

The former show jumper is also the stable foreman for successful local trainer Aaron Purcell and his involvement in the horse industry stems from his family's love for all things equine.

His grandfather is Leo Dwyer, a well known local horseman who has been clerk of the course at the Warrnambool racecourse for 53 years.

"Being the oldest grandson I was thrown into the horses straight away. I was thrown onto Shetland ponies as a kid and it took off from there. I never knew anything else apart from horses for a long time," Mr Julius said.

His interest in equine dentistry was sparked a few years ago.

"Growing up you realise how much horses actually cost and I realised if I was going to stay in the industry then I would have to find a way to be able to afford it," he said.

This realisation led Josh to establish his own business, providing him with a way to make a living and remain involved with horses.

"It is the best way to stay in the industry and provide a service for others," he said.

His family has always been heavily involved in equestrian sports.

His father, Geordie, was a jumps jockey who won the Grand National Steeplechase and AV Hiskens Steeplechase in 1984 on Kiwi jumper Gogong and his sister, Melissa, is also a champion show jumper.

"I started pony club as soon as I was allowed to," Mr Julius recalls.

He represented the Wannon Zone of Pony Clubs at a number of state championship events in show jumping and games and he also competed at Equitana, winning the A Grade pony club show jumping competition before he became involved in horse racing.

Mr Julius' connection with Tears I Cry, the 2008 Emirates Stakes winner, was his first foray into the racing industry.

His aunty, Anne McGrath, owns the group one winner and Josh attended the races whenever the thoroughbred was running.

A job as a racehorse strapper opened up for him with Ciaron Maher, the then trainer of Tears I Cry.

"He asked me if I wanted to come work for him and I jumped at the opportunity," Mr Julius said.

He worked for Maher for a year followed by a stint with Pat Ryan in Warrnambool before moving to Geelong.

There he worked for former Warrnambool jumps jockey and now trainer Kelvin Bourke as a track rider, working with group one winners and young horses. Mr Julius moved back to Warrnambool two years ago and took up a position at Darren Weir's Warrnambool training facilities.

During this time he also began looking after Anne's on-course stables at the Warrnambool track.

After applying and being accepted to the Australian Equine Dental Practice, Mr Julius began an 18-week course with Peter Borgdorff.

The course also saw him complete an extra two months travelling across Victoria and New South Wales, where he undertook practical lessons and complex cases with vets and other equine dentists.

"From there began the business from scratch," he recalls.

Mr Julius said ensuring horses teeth were properly looked after was an important responsibility for all horse owners.

"You wouldn't take a horse somewhere without shoes on or it's feet looked after," he said.

"Regular dental treatment to keep on top of things is important. It's not as scientific or expansive as human dentistry but when there is issues it can cause a lot of problems. Getting on top of those problems and finding them early and eradicating them is the key. It's an important but often forgotten necessity in a horses health."

"With young horses, especially two and three year olds, there teeth are so soft that having a lot of activity with different bits can cause irregularity," he said.

"Correcting those irregularities and giving gear and bit advice to trainers is important."

Mr Julius has also noticed issues with smaller horses and Shetlands where teeth overcrowding is an issue.

He has recently returned to pony clubs across the south-west to give dental demonstrations at rally days and the family affair is continuing, with Mr Julius still in charge of Anne's stables.

They have recently had success with two horses, Clang and Dazzle and Sixbeat, winning at racemeets.

Mr Julius is also set to gain his trainer's licence in the coming months, beginning another chapter in his equine career.